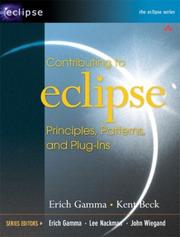 Eclipse is an open-source editor/development environment that is extensible in a way that is reminiscent of EMACS, but based on Java rather than Lisp and the user interface looks more like Visual Studio. This book is aimed at developers who want to extend Eclipse, it assumes you have a working installation of Eclipse 2.x to play with.

The back cover says it's "comprehensive" but it's not. It is more of an introduction than a complete guide, because it aims to give you an idea of how to work and find more information by yourself. It does this by developing an example; there are many details specific to that example, but they may or may not relate to what you want to do. For a start, you will have a problem if you want to make tools for editing anything other than Java (yes I know Eclipse is implemented in Java, but the editing environment is supposed to be language-agnostic).

I do not like their apparently last-minute treatment of accessibility and internationalisation. There is a short chapter on it, along with an admission (on page 262) that the book's example code is inadequate in this respect. I can understand such corner cutting when things need to be kept simple, but this book's code is otherwise very detailed, so it could have set a better example. It looks like they were asked to address this issue shortly before the book went to press, rather than being aware of it from the outset. Even their admission fails to point out the full implications of conveying information using hard-coded red and green coloured rectangles, such as the effect on people with colour-blindness and those in cultures where red means happiness instead of danger. And yet about 30% of the book discusses the code to do it wrongly.

Overall, I think Chapter 1 is good, but how useful the rest will be depends very much on how well it happens to match what you want to do.