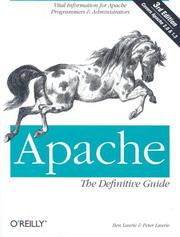 This book is for people who have used the web and have decided to run their own web servers and sites for themselves.

This book explains what a web server is and how it works. It explains web servers from Apache's point of view beginning with a simple web site and finishing off with a more capable web site running under Apache (1.3 or 2.0) under Windows or one of the Unixes (like Linux or BSD)

Chapter one introduces the reader to the basic concepts of a web site while chapter two gives the reader an introduction to running a simple web site, complete with an example. The authors then use the remaining twenty chapters to running industrial strength web sites. They cover server house keeping, virtual hosts, authentication, indexing, proxying, logging, security, big web sites, building applications, server side includes, PHP, CGI& Perl, mod_perl, mod_jserv, XML, the Apache API (latest v 2.0 and older v1.3) and how to write an Apache module.

Chapter 2 introduces the first tutorial web site, site.toddle. After some hard work, I got Apache to look at the first example site, site.toddle. Apache dealt with that success by reporting "out of memory" and plain quitting. Chapters 3 and 4 build upon the previous chapter's work. Both detail configuration settings.

This is a temporarily suspended review, which will be completed later on in the year, hopefully when I have access to better facilities.