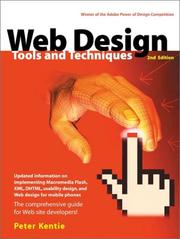 As I was reading this book the saying "Jack of all trades - master of none" kept running through my head.

44 'chapters' in 436 pages - with a chapter on Java programming, another on JavaScript, and another on Shockwave Movies - you begin to get the idea that this book dips a toe into just about every tool and/or technique that the author could find.

This is a second edition, published in 2002, yet the impression I get is of a much older book. The chapters on HTML talk of the problems of Internet Explorer 2, and that nearly all browsers' work to HTML version 3.0 - HTML 4.1 was released in 1999!

There are examples of very bad style; of using a fixed template so that you can use H2 for document title and B for sub-headings.

There are many errors; suggesting that ROWSPAN and COLSPAN attributes can be used in TR elements; or if you want larger coloured text you use two FONT tags and only one closing /FONT tag; much of the HTML is not well formed.

The first tool that the author suggests that budding web designers might use is Microsoft Word 2000, which is generally recognised to produce very bloated HTML.

This is an old book with a little editing and a few more recent tools added to produce the second edition, which tries to address too many topics. Not recommended.