REVIEW - Webmaster in a Nutshell 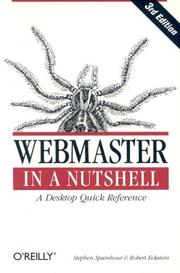 Webmaster in a Nutshell

The books in O'Reilly's Nutshell series are neither definitive detailed references nor tutorials. Instead they provide a handy, concise reference for something you've already learnt but can't keep entirely in your memory, and would otherwise need several books for. The Nutshells generally fill this role very well and are highly regarded; this is no exception.

Webmaster in a Nutshell can be considered to have two halves, client-side and server-side. The former covers HTML - with separate chapters usefully dedicated to tables and forms - CSS, XML and Javascript and the latter CGI and Perl, PHP, and Apache - configuration, modules and performance optimisation.

When I first dipped into the book while coding some HTML I wasn't terribly impressed, but having browsed it much more thoroughly for review, I've got a much better impression. It's worth getting a good overview of how the book is laid out before using it as a reference. I felt that if I was only going to have one book on web coding this would be it, and if I had not already read others it would suffice alongside some basic tutorials and code examples from the web. I say coding, because the Nutshell doesn't offer any advice on design or images, or software for site design, editing and management. The latter is understandable, because it would be platform specific. On the plus side it does have useful information about common browser incompatibilities in areas like Javascript and the DOM.

I think on the whole I would give this a Highly Recommended rating.