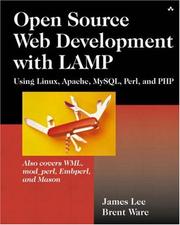 The title of this book is something of a misnomer I discovered when it turned up. It is really all the varieties of Perl you can eat, with a few side dishes thrown in. Perl is obviously the first love of the authors and it shows.

That said, if you plan to use Perl as your scripting language to build an open source web site, then the book is probably worth considering. The avowed purpose of the book is to allow web developers to 'hit the ground running' if they come to open source from other areas.

The acronym LAMP stands for Linux, Apache, MySQL and either Perl, PHP or Python according to taste - although in this book the P stands unequivocally for Perl with a brief nod to PHP. The book does not cover content management systems (like Zope) at all, which is an unfortunate oversight. It also doesn't cover either XML or JavaScript, and I find the latter, at least, somewhat surprising.

The first part devotes a chapter each to the Linux operating system, the Apache web server, Perl and the MySQL relational database system. The chapters give you the basics, but you would need a proper manual to use them efficiently and safely.

The second part looks at static web site development and introduces the Website META Language (WML). I have to confess that I'd never heard of this before, and to be truthful, it seemed to me a rather complex way of building a static site. I suspect that it's a product of the fact that most open source web creation tools don't yet have sophistication of their Windows counterparts. Once they attain that level I suspect that languages like WML will fade away.

Part three deals with dynamic web sites, and starts, as you would expect, with a general introduction to the Common Gateway Interface (CGI), using, of course, Perl as the language to write CGI scripts. The remaining chapter of this part covers mod_perl, Apache's built in web server.

Finally, stuck on the end, a bit like a fifth wheel on a carriage, we have a chapter on PHP. I'm left with the feeling that after they delivered the book their editor said, "Hey, guys. What about the other 'P' scripting languages?"

As the authors themselves say while discussing the options for writing CGI scripts (p187), 'CGI scripts can be written in almost any language; we like Perl.'

I'd never have guessed!