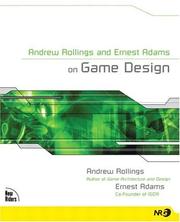 I have to admit that I approached this book with more than a little cynicism. As a game designer I often get asked to comment on books about game design, and frankly most of them are crap. This time though I was pleasantly surprised - a well written book whose authors clearly know what they are talking about.

This is not a book for those who 'want to get into the business'; it is strictly about the art and science of game design. The book will appeal to those in the computer games business who are already games designers, or who are aiming to move sideways into games design. It will also appeal to anyone who just wants to find out how it is done.

The book is in two sections. The first part covers general issues that crop up in games design, while the second half of the book is a systematic look each of the different game genres.

What weaknesses there are tend to show up in this second half, which is a little uneven, since the authors don't (understandably) have first hand experience of each genre. There is also something of a tendency to try to jam all the genres into the same framework.

The weakest part of the book is the chapter on multi-player games where there is a failure to realise that game technical and social management tools have to be part of the design - they can't be bolted on afterwards - boring, I know, but important.

But these are not mega problems and they don't detract from the overall usefulness of the book. I've been designing persistent world multi-player games (and one commercial single player game) for nearly 20 years, and there was much in the book that I found helped articulate and systematise my experience.