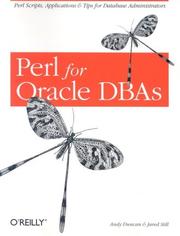 clear, jovial and a pleasure to read.

Perl, Oracle and Database Administration, along with the world wide web, go together like "horses and carriages". The ability of Perl to enable quick, knock-together, yet rugged scripts suits the tasks of the DBA admirably well.

My own exposure to Oracle has been limited. I am much more familiar with MySQL, but this does not at all limit my appreciation of the current efforts. Indeed the similarities are immediately obvious. A complete munging example is given where data is sucked from a MySQL database and poked into an equivalent Oracle one.

Perl's strength derives from the availability of Modules - ready built blocks of code that can be seamlessly incorporated into user programs. This is particularly true in the area of databases. The Perl DBI (database interface) is one of the most popular. (It is currently maintained by a friend of mine from Belfast). Modules can be pulled down from the web and installed effortlessly - there is even a module available to do this. All this is described fully.

Part III describes a complete DBA Toolkit developed by the authors in Perl. It is available for both Win32 and Unix operating systems.

Another area of covered is the user interface, again implemented by modules. One being the Perl/Tk module, which enables the user to build professional Oracle DBA GUI's with little heartache. All explained well, especially GUI's for DB tuning.

Another thing that that I found useful about this book was an appendix on regular expressions - not just the technical aspects, but the historical development. I had no idea that Alan Turing played a part, nor that Godel was involved. It seems that the mathematics department at Princeton was central to the development of regexes. Godel, Turing, Stephen Kleene and Alonzo Church all lent a hand there at some stage.

Yes, I can thoroughly recommend this work. I got a lot out of it. The style is clear, jovial and a pleasure to read.