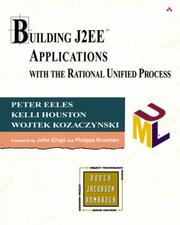 I became sceptical early on reading overflowing praises in the foreword and preface, but my major gripe must be the chapter titles being unnecessarily repeated in full at every reference. Halfway into the book it chafed, though others may disagree. (Typesetting/binding is good though.) Another gripe: I found myself scratching my head a lot at such things "Design subsystems" and "Design packages" being used in the same breath, and needed the appendices often to look up their distinction.

Cutting to the chase: Chapter 2 gives a concise and useful introduction to J2EE. The waffle starts to creep in at Chapter 3 introducing RUP, then I found it progressively harder to pay attention until chapter 6 on Requirements where I liked the material on reviewing and getting user sign-off on requirements 'artifacts' [sic], also something I've rarely seen mentioned in use-case modelling treatments. (The authors provide a nice checklist of items such a review should cover on p 84.)

The section on User Experience Modelling (in Chapter 7) is a gem - an insightful exploration of the GUI within a Use Case based UML model, going beyond just labelling GUI classes with the boundary class UML stereotype.

Overall though, after the glowing enthusiasm in the forewords etc (by more than one person) I felt disappointed. Frankly I had to force myself to revisit this book. If I was working on a J2EE project using RUP, I'd probably be happy spending under£25 and (force myself to) read it again.