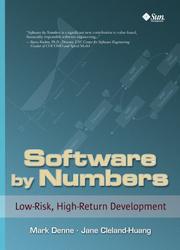 This book describes a scheme for ordering the development of items within a particular project to maximise the Return on Investment (ROI).

The premise of the book is that following the dot-com crash, getting investment with projected payback over any period other than the short-term is increasingly difficult. Therefore, steps have to be taken to ensure returns are made quickly on investments made, with a minimum amount of capital tied up unnecessarily in effort that does not provide immediate return.

Within its scope the book worked well. It showed how to identify 'Minimal Marketable Features' (MMFs) which are the smallest units that can give a quantifiable return. The book then showed the arithmetic formulae to calculate a true ROI on development of these features, and discussed ways to improve the ordering of MMF development within the project to maximise ROI. It then showed how this financial scheme could be applied to development methodologies such as RUP and XP (the authors were keen to say that this process is methodology independent).

On the downside, I felt that for many projects the book was over simplistic. It seemed to assume that the cost of a release of software from development to a live environment was directly proportional to the cost of development. Hence there was no discussion of how to factor in variable costing depending on the number of drops to live. Similarly it didn't address issues with variable team-size etc, which project reordering would be expected to throw up.

In short, this is an interesting book with some useful ideas, but probably to be taken with a large pinch of salt.