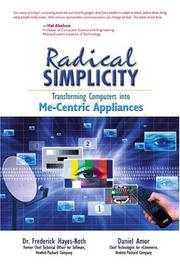 This book is about 'me-centric computing', which (according to the cover) relates to the 'next computer revolution'. The general idea is that computers will become more pervasive, and become embedded in more and more appliances as time goes by, which will create new patterns of use for computers.

These appliance-computers will be able to communicate with each other in unexpected and useful ways. This, say the authors will require the embedded software to be more task-oriented and integrated around the user (which is the me-centricity referred to in the title).

To be useable this will require the computers to be far more user-friendly than the current status quo. As an illustration the authors refer (repeatedly) to the difficulty many people have in programming a video recorder. If a watch became similarly complex, would it be useable (and would it require a thick instruction manual to be carried around at all times)?

The book generally seems to be an exercise in blue-sky thinking, peppered through with example of how the future technology might operate - contrasting with how similar situations are handled today.

Although the premise for this book is interesting, in general I was disappointed by the details.

The cover blurb says 'this book shows how', there were few details (XML and Internet I would probably have guessed myself, 'agent' software is rather too generalized a term to help).

Another grouse I had with the book was that I felt that the examples they had were somewhat pedestrian. For example, software agents were to be used to verify the date/location of a meeting. Why do agents not continuously monitor diary compatibilities? The suggested solution seems no better than current diary capabilities (e.g. from MS Exchange).

In summary, this book has some interesting ideas, which it presents convincingly. However, I would have hoped for more details, both in terms of the vision and how it might be implemented.