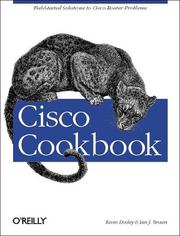 Cisco's IOS is huge. You just won't believe how mind-numbingly huge the IOS is. This book is full of proven 'recipes' for network engineers to use to solve problems configuring Cisco routers. I did not expect to read the book from cover to cover but it is full of techniques I had never thought possible. It should probably have "don't panic" written in large friendly letters on the cover.

This book will appeal to a limited number of people due to its rather specialised nature. You will need a networking qualification to understand the subject matter. Some of the examples are very trivial, while in others whole programs are provided, written in Perl or Expect languages, to streamline the configuration of large networks.

In 23 chapters and 870 pages it manages to cover a vast array of subjects, most of them related to TCP/IP. This includes most of the major routing protocols, plus router authentication, Frame Relay, tunnels and VPNs, dial backup, SNMP, access lists and multicast. There are many other aspects of router management that are comprehensively dealt with, but it's impossible to list them all here. This is certainly not light bedtime reading!

Each chapter has an introduction of between 2-5 pages that explains the subject quite concisely. Each 'recipe' is described in enough detail to understand the technique being demonstrated, but it helps if you have previous knowledge of the subject. The only major omission is a glossary for the hundreds of acronyms that this book introduces. However, the glossary might have been as big as the whole book!

Overall, the book fulfils its purpose very well. Networking is a huge subject and the authors have chosen a good range of topics to cover. If you are a network engineer this book will be a boon.