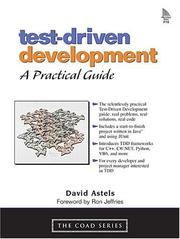 This book is subtitled "A Practical Guide", and it is definitely that. It includes an overview of many of the tools available to assist you in using Test Driven Development (TDD), along with detailed descriptions of how TDD works in practice. The bulk of the book is taken up with working through a complete project from start to finish using TDD. This demonstrates many of the techniques in action, and gives examples of how to test different types of behaviour, including the GUI, which is notoriously hard to test. The book also includes appendices giving an overview of eXtreme Programming and Agile Modelling.

Most of the book uses Java as the target language, and it does appear that the majority of tools available are for Java. However, that does not mean that the techniques discussed are not applicable to other languages; there are chapters in this book dedicated to the use of the "xUnit" testing framework for various languages "x" - such as C++, Python, and Visual Basic.

The main thrust of TDD is that you write tests for the expected behaviour of the production code before you write the code, and that you don't add new code to the system except in response to a failing test. This takes some getting used to, but the key benefit is that you get a high-coverage automated test suite that automatically tells you if you break something when you make a modification.

As programmers, we all know that automated unit tests are a Good Thing, but writing tests after the fact is difficult, and seems like a chore since we already "know" the code works. TDD is not like that. I've been trying it on my latest project, and I am now "test infected" - I'd rather work this way than how I worked before. Applying the techniques discussed in the book to C++ was relatively straightforward; with the help of a few editor macros, adding a new test takes just two key presses, and I've managed to add the automated tests to the build script, so they appear as compile errors in the IDE.

I would recommend this book to all developers, especially those who find writing tests tedious or unnecessary, and those who wish they had a better set of tests when modifying code. Though TDD is one of the key techniques used in Agile methodologies, it can be used under any methodology, since it just replaces the developer tests that most developers would like to have anyway (but probably don't). Highly Recommended