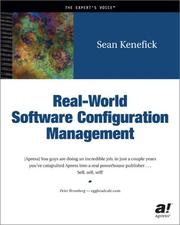 The role of SCM is often shrouded in a fog created by tool vendors in an effort to make their software solutions essential. This book aims to demystify the role that SCM should play in software development. The start of the book talks about why you need configuration management. There is not a lot of theory but illustrates points with lifelike examples.

Part 2 deals with source control. Chapter 4 gives an overview of source control tools. This may not be very useful to a new graduate just given the SCM job with no control over which tool they use and no use at all to anyone who has been involved with software for any length of time.

Chapters 5 and 6 deal with the use of CVS and MS SourceSafe respectively. Again this might be of some use to a new recruit but I would prefer they learn under supervision as part of a team than from one chapter in a book.

The best part of the book is part 3 which describes the setting up of an SCM environment from scratch and creating scripts to perform a build. The author starts with a bullet list of steps for a build and refines it through pseudo code to an eventual build script. This includes a section on make and Ant.

The front cover says that it "covers both Windows .NET and Linux" but aside from mentioning rpm packages (in about a dozen pages in the very last chapter) there is little about Linux. The chapter on Windows .NET discusses using the MS IDE and Perl or VBScript but I would have liked to see tools like NAnt and NUnit mentioned.

The scripts are available from the author but I have not tried using them and cannot comment on them.

Overall a well laid-out and readable book but I feel that the two chapters devoted to using CVS and SourceSafe were unnecessary.