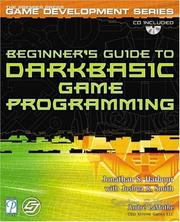 The premise behind DarkBASIC is to give, in a BASIC like language, the power that is needed to access DirectX (easily) and so make games. It is obviously tied to the Microsoft Windows world and in my opinion the amateur/hobbyist games market. The book has three main sections: "The Basics of Computer Programming", "Game Fundamentals: Graphics, Sound, Input Devices, and File Access" and "Advanced Topics: 3D Graphics and Multiplayer Programming".

As the title of the book suggests it is a "Beginners Guide", it does try to handhold the reader as the print is large and there are lots of pictures. Even so, the first part of the book is a strange mix it introduces all the basic procedural programming topics, in examples. But it does not make the user think and extend the work, just follow along the exact path given, it does not promote true understanding of how to link these ideas together into a game (or any program).

Part two could be subtitled the functions called in DarkBASIC which are used to access the different parts of DirectX, (not very snappy subtitle but part two is not very snappy either at 300 pages or so). It is a fair reference and it does show the power and extent of DarkBASIC, but it does not tie all the bits together into anything but little noddy gamelets. It does not cover any real game design, story progression, production process (design, coding, testing). True this is only one book but it does not really hint at all the other parts that go into the creation of a game. The final part quickly looks at the advanced topics of 3D and multiple payers but only in an introductory way.

My verdict, it is as the title states a BEGINNER's guide to DarkBASIC, only those people who have little or no (or very rusty) procedural programming experience will find this book useful. True it will give them a leg up into DarkBASIC programming, but they still have lots to learn about programming and even more about developing games and the games industry. Overall an average to weak rating.