REVIEW - About Face 2.0 - The Essentials of Interaction Design 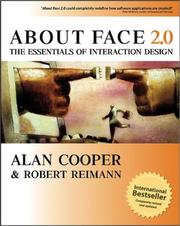 About Face 2.0 - The Essentials of Interaction Design

I think back to a programming conference in Cambridge in the mid 1990s. I had planned to attend one session by Alan Cooper and spend the rest of the day doing more programming things. I spent the rest of the day in Alan's sessions. It was all a revelation! He was describing problems that people have when using software in everyday terms, while explaining the underlying problem.

It is like putting a handle on the side of a door that you need to push. It is not the end of the world. When you first come to that side of the door you pull the handle (you don't push handles - well I don't). The door does not give, so you push. Next time you know to push the door. But sometimes the handle on the wrong side still catches you out.

OK you can complete your trip with just a little delay, but by jolting the door, your journey has been disturbed. People are at their most effective when they enter a state of 'flow' - everything just works, you know where you are going and what you are going to do. Then you hit a menu option that you have to think about or does not do what you expected. You lose flow and you become less effective.

About Face highlights the issues that 'jolt' when using computers. You write in a notebook and place it back on the shelf. When was the last time it asked you if you want to keep your jottings? Yet when I finish writing this review, the software will ask if I want to save the changes? This is putting a programmers problem (reconciling copies on Hard disk and in memory) in the to users' domain - where it does not belong!

If you have the first edition, I would encourage you to also get the second edition of this book. User Interface Design is a moving target, and more issues are addressed. The second edition has more psychology of interaction and covers acquiring requirements (ideas like talking to people in their place of work, maybe while they are doing the job).

The second edition is a major re-write, very informative and challenging. It ought to be read by any one who makes any claim to design user interfaces. Highly recommended.