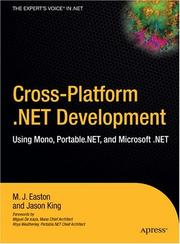 I was impressed by this book, in spite of the tendency of the authors to use what they obviously believe is the sort of language that will appeal to geeks. The book is a compendium of useful information for anyone considering using .NET as a development and production platform on Windows, Linux and the Mac.

I'm not sure how big an audience this book will command, given that its subject is guaranteed to enrage purists on both sides - .NET is the work of the devil or Linux is the spawn of evil - but if you do happen to be working, or considering working in this area, then I would have no hesitation in recommending it.

I should point out one severe limitation on working with cross platform .NET, though. At the moment only C# compilers are available on Mono and Portable .NET (used for the Mac). This tends to put C++ and VB developers at a disadvantage. Of course, you can develop in Visual Studio .NET and move the assemblies over to Mono and Portable.NET, but you will probably find that somewhat restrictive, given the amount of native code used in some of the key .NET libraries. On the other hand, if that's what you need to do, this book will give you a solid basis for choosing which libraries to use, and which to avoid. A useful book.