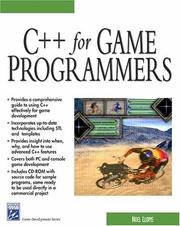 If this book had been called C++ - an intermediate guide, this review would have been somewhat different. It isn't and as such, it's not a very pleasant review.

The problem is that the book has very little to interest a game programmer. The C++ contained in the book is pretty much your run of the mill, generic material. The code fragments are just that - fragments and in my opinion don't really re-enforce the points the author is trying to make.

Sure, there are bits on AI, games physics, communication and large objects, but these are consigned to the back of the book - less than 1/4 of the book covers these aspects. The rest, containers, smart pointer, linked lists - standard fodder.

Secondary to this is the book is unsure who it is aimed at. The book claims "intermediate" on the back - however, it's not. The STL is far better covered in Josuttis (the STL takes the majority of the book). It's no good for beginners as it's way too brief. It's no use to advanced bods as they will already know the material covered and it's not high enough for intermediates who should already know about linked lists et al.

If you're after a straight C++ book, there are far worse on the market - there are also far better.