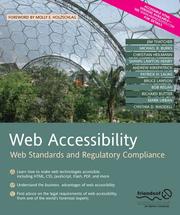 The chapters of this book were contributed by many different authors, and the type, quality and relevance of the content varies enormously from chapter to chapter. Although there are passing references from some chapters to others, overall it feels more like reading a set of conference proceedings than a unified book. The authors sometimes seem to disagree with each other and this can be confusing. For example, should one's Web accessibility effort revolve around lengthy law-book stuff, or would it be better to understand the underlying issues? Is there any point in automated testing? Does 'accessibility' include catering for a variety of devices and operating systems, or just for expensive commercial Windows-only screen-reading software? Should 'skip to content' links be visible or not? It all depends which chapter you read, and the book's target audience may find that unhelpful.

There are some gems in this book if you can find them. The chapter on stylesheets is good and the chapter on accessible scripting has some good points, and the introduction is very reasonable if you can put up with the American jokes. But why do technical books have to be two inches thick to sell? Couldn't some of those extra chapters be more concise and to the point? Couldn't there be more co-ordination between them? (Chapter 16 tries to tell you what HTML is as if you didn't know anything about technology, but would you have got that far if you didn't?)

The cover prominently says 'Mac and PC compatible', so why is so much of the text Windows-only? There is much discussion of Windows accessibility software (and some of bundled features), but absolutely no mention of the Mac's accessibility, which has improved greatly in recent years and ought to be at least acknowledged if you're going to write on and on about Windows in a book with a 'Mac' label on it. And although IBM people were involved in the book, mentions of Linux are infrequent, brief, and arguably inaccurate.

The printing could be better too. Why not reduce those big margins to allow for a clearer font? Some figures are confusing, and it seems the authors weren't told they'd be printed without colour. There are misprints too. And a label on the front says that an accessible HTML version of the book is available, but they won't tell you the URL; they just tell you to go hunting for it on the publisher's site. This practice is a great example of NOT helping accessibility. When I did manage to find it, I was told that I had to pay for it (having obtained a paper copy of the book doesn't exempt this).

I must point out the following piece of extremely bad advice. Chapter 12 (which is about using Adobe's tools) recommends OCR-ing court documents as 'searchable images', which means the results of the OCR are hidden behind the original image. This is great for searching, but it is extremely risky practice if you're involved in making court documents accessible, because it amounts to running them through an OCR program without even glancing at that program's output before you give it to someone who depends on it. Would you want that done to your legal documents?

I don't want to give this book the 'not recommended' tag because it does have some good points. But sadly it has serious bad points too, so be careful.