REVIEW - Electronic Brains - Stories from the Dawn of the Computer Age 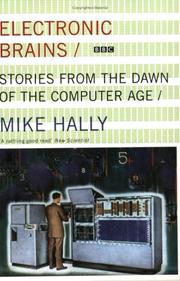 Electronic Brains - Stories from the Dawn of the Computer Age

This book charts the development of the first electronic computers in parallel across the world after World War II. Contrary to popular belief this took place in Britain, America, Australia and the then Soviet Union. It also discusses the development of mechanical computers.

The early computer applications were either military (shell trajectories etc) or weather forecasting. Also computing started off with "controversy, falling-out, setbacks, smears, financial mis-management" - something the industry still hasn't grown out of. Later on the census departments and payroll departments all started using computers.

Chapter 4, "When Britain led the computing world" describes the work of many but Alan Turing and Maurice Wilkes both stand out from the crowd. This was a temporary advantage, soon to be outstripped by America's economic might.

Chapter 6, "Leo, the Lyons computer" describes how Lyons started as a wholly owned subsidiary of a tobacco company. Lyon's the tea company had a company culture of self-sufficiency in order to maintain high levels of quality. So it is not surprising that the company built its own computers for data processing work - so the LEO (Lyons Electronic Office) was born.p.

Chapter 8, "Water on the brain" discusses the MONIAC, a hydraulic computer that graphically illustrates the flow of money in an economy, developed in New Zealand by Ben Phillips. He made ground-breaking work in economics in his career.

Chapter 9, "It's not about being first: The rise and rise of IBM" describes the conditions that Thomas J. Watson worked under at NCR (a rapacious company if there ever was one) before setting up IBM, after he got his hands on one of his employer's companies, CTR (Computing-Tabulating-Recording), in the late 19th century. In 1924 CTR was renamed IBM and all of Watson's experience shaped the development of IBM. Watson demanded absolute loyalty from his staff and gave them absolute loyalty in return. The global success of IBM's machines resulted in their subsidiary, Dehomag, providing the administration equipment used to organise the Holocaust.

After the war, Thomas Watson Jr took over the reins from his father and moved IBM away from mechanical systems to electronic computers, starting with the IBM 701. Later on he bet the farm on a family of compatible computers, the IBM 360 and the company came to dominate the market - even the Soviet Union, in the cold war, the authorities scrapped their own designs and produced their own IBM clones.

For readers who want to delve deeper into the history of computers a bibliography is provided.