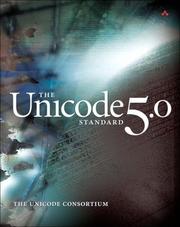 This book contains the latest version of the Unicode Standard, including all of its Annexes, for a total of 1,417 pages (plus a CD).

If you have any interest in using European character sets you might be able to get away with using one or more of the ad-hoc methods that were invented before Unicode came along. However, the computing world jumped on the Unicode bandwagon nearly 10 years ago and if you plan to create text in any non-English language you will probably use Unicode and will need a copy of its standard. Buying this book is the most cost effective way of obtaining the Unicode Standard. As far as I could tell all of the material on the CD (text versions of all of the Unicode data files) is available on the Unicode web site.

The book is a lot more than a collection of numbers and the corresponding visual representation of the characters they denote. There is extensive discussion, on a per language basis, of the problems associated with encoding the character sets of planet Earth (a proposal to support Klingon was rejected). This edition contains significantly more background material than earlier editions, but has shrunk from an A4 page size to something slightly smaller.

Individual characters rarely exist in isolation, they are combined to form words, sentences and paragraphs. The problems associated with creating and using subsets of the Unicode characters (ie, those belonging to a particular language, or combination of languages {eg, inserting an English quotation, in English, into a character sequence representing another language}) are covered in great detail. The detail is so great it is possible tocreate an implementation from it.