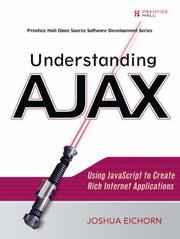 There are many technologies that get hyped by the media and Ajax even had a catchy name that didn't sound like an acronym (although it is). But even more impressively, it was a real technology that worked, in fact had been in use before the media discovered it. It was first described nearly two years ago and the defining application of it is the GMail webmail site. Since then a rapidly growing industry of frameworks and sites have sprung up based on Ajax.

Joshua Eichorn has been using Ajax since its inception and has an excellent grasp of the concepts involved. Although the book is about using Ajax, another title would have been Building Rich Internet Applications, as that is his primary focus in the book.

The book starts by giving a background to Ajax and how it fits into existing web development, not as something completely new, but to complement and improve what we already do. There is quick run through of making some simple home brew Ajax enabled pages using various techniques for passing data back andforth to the server before moving on to integrating it into existing applications.

One of the common threads throughout Eichorn's book is using the technology to improve the users experience and there a couple of substantial chapters devoted to that with a strong focus on usability.

Part 2 of the book describes a selection of libraries and frameworks for Ajax. Eichorn is a developer of one of the libraries mentioned but he doesn't favour it in particular, the treatment of all libraries is fair. There are three small sample applications developed here, using a selection of the libraries facilities. It's this section of the book which could be dated quite quickly in that the libraries could disappear or be superceded, but the descriptions are written in a way that also details the decisions made on what to use and how to implement it. And as a developer himself, there is a good section on debugging the applications.

Finally there are three appendices giving a brief rundown of the existing libraries and frameworks, their strengths and weaknesses, with web site addresses. This is probably a good starting place for choosing a library. He also lists the licenses they are distributed under, an important point.

The book is well put together, with very few typos and edited to a high standard. The index is a little thin but usable (you get access to the searchable online Safari edition for 45 days when you purchase the book). Eichorn's writing style is very clear and readable. He does assume that you have a good understanding of HTML, DHTML, Javascript and HTTP protocols. All the server side code is in PHP but should be easily transposed into Perl or Ruby if needed.

I would have liked a little more on the internal details of how Ajax works but that is not essential for creating Ajax web sites. On the other hand, I appreciate the fact that he hasn't felt to pad it out with descriptions of how to setup your webserver and what HTML is.

My other reservation is that some of the chapters on specific libraries will be out of date quite quickly. This is nearly half the book, but on the other hand he has picked mature libraries that will probably be around for a while, so that may not be too much of a concern.

If you have a clear understanding of web development and want to start using Ajax on your web sites, this book is Recommended.