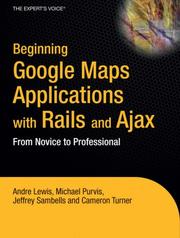 It took me a while to review this book, as its topic is quite specific and I didn't know enough of the technologies to make sense of it. So, in the meantime, I got a couple of books on Ruby and Rails, and then continued the review.

Google have published the API for their web-based maps technology, allowing you create your own web sites/applications. This book takes you through the process of creating the "Hello World" Google maps application, adding interaction via Ajax, and goes on to cover some advanced mapping concepts, which you may need to produce a heavily-used site, or to provide your own datasources. Geocoding is covered, using a number of sources including Google's own and Yahoo's.

Source code is provided on line, although it didn't always match what was in the book, and it wasn't clear which stages of the chapter the various folders referred too, but it did build and run.

The positioning is that you know Rails and therefore Ruby and are comfortable creating and running Rails applications. They do give you some guidance, and I managed to muddle through. JavaScript and Ajax are introduced on a more gentle basis, as is the Google maps API, which is documented in more detail as an Appendix.

Generally, I found the book competent, and described the concepts well. The different chapters sometimes build on the previous ones, sometime start something new, so you have to pay attention to what the code is and where it is supposed to go.

Using some of the ideas, I had a play with a couple of ideas I had and made some good progress. A lot of bits and pieces are required for these applications, particularly if you want them to look good. There's Rails, with Ruby, Rake, etc. Then the maps API is JavaScript-based. Then there's CSS to present your pages, then there's more JavaScript to do some presentation where CSS isn't rich enough, some Ajax to talk to the server, etc. For that reason, I sometimes found myself a bit lost as to where to turn to change something. As mentioned above, the code online didn't always tally with what was in the book, and where all these bits and pieces come together, that did make a difference. Perhaps that illustrates a weakness of this type of application.

Overall, though, if you are planning to produce a website based on mapping concepts, this would be an excellent book to start with. For others, as it was for me, it's an interesting topic to read for its own sake, but doesn't have enough depth of any particular technology (Ruby, JavaScript, Ajax, etc.) to serve as a reference. That said, if you have some knowledge of these things, having them all put together to create a working application might be something useful to read about here.