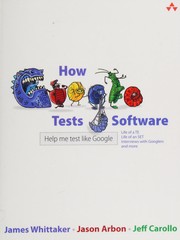 The book gives an overview of the people (SETs, basically a developer/tester role and TEs, test engineers) that are behind the testing. Tools are covered, without going into too much detail. I must say that I envy the Google CI system. Selenium/WebDriver gets quite a few mentions, which I suppose makes sense as it is close to their core business.

Whilst I wasn’t expecting the book to literally fit its title and explain the Google systems in detail, I do think that a bit more structure would have helped. There are bits that feel like someone took their Dictaphone to the coffee machine and left it on while a gang of people were chatting casually. Then again, perhaps that’s how things are inside Google.