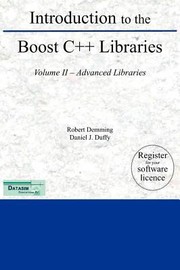 Fairly obviously, this books carries on where Volume 1 left off. Roughly, the libraries covered fall into three main categories: maths, network and graphs, as well as a few odds and ends.

I felt that the early mathematical chapters were a bit lacking. The examples seemed to lack purpose other than being examples. Some of the examples didn’t even seem to illustrate the point being made that well. For example, in Chapter 2 ‘Math Toolkit: Special Functions’, there are examples of using nextafter , float_next and float_prior . The results are streamed out to cout at the default precision whereas at least 16 places are needed to be able to see any difference.

Things improved from Chapter 3 onwards, and I felt that from then on there were no more gaps in the coverage, and the chapters on I/O networks and graphs made plenty of effort to cover the background subject matter. I would recommend this book for all but the first two chapters.