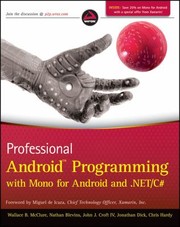 Professional Android Programming with Mono for Android and .NET / C#

Xamarin.Android (as it is now known) suffers from one simple thing – a lack of any sort of reference material. There are scant few books covering .NET programming on Android devices and programming with .NET on

Android is not the same as programming for Android in Java. For a start, it’s easier! If you know .NET already, why go through the curve of learning Java? What this book provides the user with are simple to follow examples of not how to code in C# (that is wisely left to other books), but how to code for Android using C# and to be able to access video, sound, maps and pretty much any other aspect of using an Android device. It is an invaluable addition to any book shelf. Everything in the book is clear and well explained and what is even more important, I was unable to find any of the examples that didn't just work straight off or leave me in any confusion on how to code for Android using C#. The book though does have two omissions, one of which is perhaps excusable as it can be argued as being outside of the scope of the book and that is helpful advice in porting native Java source to C#. Bringing code from the plentiful Java examples to C# is of immense use. The other omission is memory management.

Xamarin.Android suffers from a memory problem. Say you create a List

Despite these, this book is just what the doctor asked for. A simple to follow and clearly written text that shortens the learning curve.

I hope there is a second edition which corrects these omissions and adds in animation as well as bringing it up to date with Android 4.2 being covered.