REVIEW - The Technical and Social History of Software Engineering 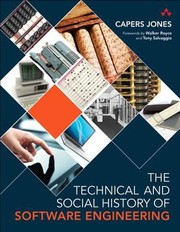 The Technical and Social History of Software Engineering

After a brief nod towards aspects of pre-digital computing, the book is basically a linear description of the commercial market.

This book has been sitting on my desk for more than a month since I finished reading it. The thorny question was, how to review it. So, what’s the problem? Well, on the one hand it’s quite interesting, and would be useful to someone trying to write a history of computing.

On the other hand the title is a complete misnomer. It’s nothing much to do with the social history of software engineering, and a somewhat lopsided view of the technical history, concentrating on business applications and the rise of function point metrics, which the author champions.

After a brief nod towards aspects of pre-digital computing, the book is basically a linear description of the commercial market.The earlier chapters clearly make use of a lot the information contained in the Wikipedia. This was not a wise choice. The Wikipedia’s striving for academic respectability has resulted in vast swathes of material relating to personal computing in the 1980s and 90s being removed. They were either oral history, or from long defunct computing magazines, and therefore had no ‘proper’ citations, according to the Wikipedia. In social history terms this is a critical omission.

Allied to this is the complete absence of any discussion about the role of computer games in the history of computing, both as an introduction to using computers, and as an influence on software practitioners. The author briefly mentions this problem later on in the book, but makes no attempt to rectify it. It is understandable that the author is not familiar with the games industry, coming as he does from a commercial background. However, he should have made himself familiar with the industry if he wanted to write a book on the history of computing (social or otherwise). The attitude shown is redolent of a common theme in certain parts of the industry until the start of the current century. It is an attitude that considers games to be a waste of otherwise useful computing power.

Almost completely absent from the book is any attempt to discuss the social history of computing – either its effects on society, or the social development of its practitioners. For instance, the rise of open source software is as much about the politics and sociology of computing, as it is about technical development, and yet the topic is barely touched in the book. Neither are the very early struggles of programmers of the very first computers to become recognized in their own right, instead of being considered mere lab technicians by the academics who wanted to study ‘computing’. From the point of view of a technical history there is no feel of an overall concept, leading to a large proportion of the book being one or two page summaries of selected companies in the industry. Even at this level there seems to be no understanding of the extent to which the big ‘non-computing’ businesses have become, over the period covered, software houses specializing in whatever was their business before the rise of cheap computing power. The classic case for this is, of course, the big banks who have gone from being banking houses with a software department to being software houses with a banking license. The fact that most boards of directors of these bodies have not yet caught up with the reality of their business does not absolve the author of a book on software engineering history from noticing the metamorphosis!

All in all, a rather disappointing read... The reviewer is a professional programmer, and holds a degree in Sociology from Leeds University.