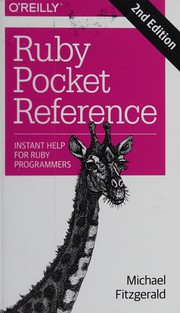 I bought this book for two reasons. One, to act as an aidemémoire when coming back to Ruby after programming in other languages. Two, to act as a concise overview of the language whilst I also make my way through the more detailed work, The Ruby Programming Language .

So, what does this book cover? I’ll give a brief rundown here. It covers using Ruby and supporting software (Ri, Rake, RubyGems), the language in general and an introduction to some key Ruby library references. I found the glossary to be useful and the list of Ruby resources (books and websites) to be very useful as well.

A few things I noticed. In parts it has references to the ruby-doc website for more information – quite useful. It would have been helpful if it had a) mentioned the basics of debugging Ruby programs b) a separate index for method names and c) if the Ruby Operator’s table listed the associativity of the operators as well.

On the whole, this book did what I expected it to do. This book is essentially a springboard into Ruby programming but needs to be complemented by other works.