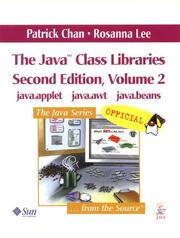 This is a reference for the Java classes in packages java.applet, java.awt and java.beans. Unlike other similar works it does not order the class descriptions by package, but instead orders them alphabetically by class name. This is helpful, especially when you are unsure in which package a class is defined.

Each class description presents the API in a style based on that provided by javadoc, but made more suitable for a printed text and supplemented by additional notes and examples. The supplementary material is generally of a very high standard, and contains a lot of useful information. Many of the code examples can also be downloaded over the Web, which will save a lot of re-typing.

Unfortunately, a large number of the AWT classes documented here have been superseded by the now released JFC (Swing) components. I doubt that anyone serious about UI development using Java is now using the AWT components for new work. This means that about a half of this book is now redundant, or at least only of interest for more specialised applications, which is a shame given its quality.

In summary, it cannot be generally recommended; only for those who need to understand the 1.1 AWT in depth.