REVIEW - The Designer's Guide to VHDL 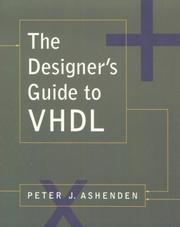 The Designer's Guide to VHDL

VHDL programmers will probably have come across Peter Ashenden's 'VHDL Cookbook' , which was made freely available on the Internet (at a time when there was little material on VHDL).

Teaching digital logic circuits normally starts with simple combinatorial logic (AND, OR gates) and then moves on to sequential logical (involving memory flip-flops). Many VHDL texts and courses follow this path starting with concurrent VHDL (which generates combinatorial logic) and then sequential VHDL. A problem is that students used to sequential programming languages (C, Pascal) find the concepts of concurrent programming difficult (gate level hardware is largely parallel) never mind mastering the syntax of VHDL.

This book takes the opposite approach. The programming starts with sequential VHDL (

, etc.) implementing programs to manipulate arrays and vectors. Concurrent VHDL is not reached until page 126 by which time the reader should be used to the language syntax. VHDL is a difficult language and designing complex electronic circuits, even with such a powerful tool, is not easy. The text contains plenty of sample programs and several detailed case studies, e.g. a pipelined multiplier accumulator (code available from the Internet).

A larger, more detailed and better book (and more expensive) than VHDL for Designers which I reviewed in C Vu July 1997. This is very good book for the professional designer and as a student text where VHDL will be a major part of a course. Where a brief overview of VHDL is an element of a module I would use 'The VHDL Cookbook' .