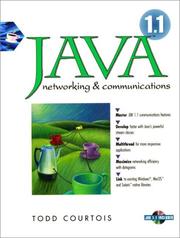 Java supports a wide range of communications facilities and this second level text looks in detail at building communications applications with Java. It starts with an in-depth coverage of streams from basic input and output streams through to object streams and object serialisation. As an example a parser for GPS (Global Positioning Satellite) data is designed and implemented. URL connections are then discussed presenting as an example an Automatic Web Drone class which could be used to download a URL at specified time intervals, e.g. stock quotes. Threads are then used to extend the drone class to handle multiple documents at a time. Client/sever programming with sockets is then used to implement a finger client and simple web server which can be tested using a web browser. The pros and cons of building applets or applications are then discussed and what parts of an implementation should go into class libraries considered.

are then described and a DNS client (which can request information from a Domain Name Service server) and a implemented. The final chapter deals in detail with linking to native libraries describing facilities for gluing native code to Java and presenting examples for Win32 (e.g. interfacing with serial communications ports), Solaris and MacOS .

The chapters present information applicable to Java 1.0 and 1.1 and enhancements in Java 1.1. The text is supported by plenty of example applications with the code available on the CD. Suitable as a second level text in an undergraduate networks/communications module (where Java has already been covered in a first level programming module) and for software engineers developing communications applications.