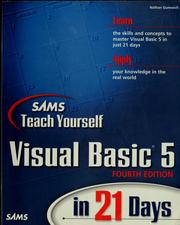 Teach Yourself Visual Basic 5 in 21 Days

The first thing to note about both of these books is that neither of them provide a copy of Visual Basic 5 in order to get you going, as with other VB5 learning books I have seen. With Visual Basic 5 Control Creation Edition available free from Microsoft it's surprising to see it missing. Only the Interactive Course book comes with a CD providing all of the source code from the book as well as a bunch of additional controls (most of which require registering and paying for if you intend distributing applications using them). One thing to note is the inclusion of Internet Explorer on the CD; this is to assist with the 'interactive' part of the book, which is simply access to a web site (called the 'ezone') to accompany the book. Its intention is to provide online testing at the end of each chapter and also access to a course mentor. The mentor is available to answer any questions that are hindering your progress, but make sure you check the FAQ to see if the question has been asked before as you only get 10 questions per course (that is, per registered user). The tests are simply an online version of the questions found at the end of each chapter. At the end of all of the tests and after passing the end of book exam, you get a certificate, which states that you've completed the course. In addition it apparently provides college credits, which are only any good if you are studying in the United States.

In as far as the content of each book is concerned, neither can be faulted. Both are easy to read and follow, presenting the material in a logical way. Each element of the Visual Basic language and environment are explained when needed. That is, concepts may be included in early examples but not explained fully until later chapters, this way the reader is not overloaded with new information. Although provided as a teach yourself reference, the 'interactive' manual works well as a reference manual as well, especially for advanced topics such as more complicated controls, file access and printing. Both cover ActiveX control creation in later chapters, an area where this latest version of Visual Basic excels.

It's difficult to choose between the two as a recommended teaching manual, but overall the interactive course book seems the better of the two. Not because of the accompanying CD, but more for the range of topics covered and because of its extended use as a reference. If you don't have a copy of Visual Basic 5 then neither of these help, but as mentioned the Microsoft web site has a free download available of the Control Creation edition which is adequate for both courses. If you don't have an Internet connection then a copy can be found on the Teach yourself Visual Basic 5 in 24 hours from Sams Publishing.