REVIEW - Internetworking Over ATM - An Introduction 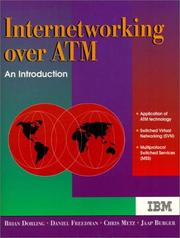 Internetworking Over ATM - An Introduction

Today's networking environment is characterised by a diverse mix of topologies, geographic spans, equipment, interfaces, physical media and transmission speeds. Because of the inherent complexity resulting from mixed technologies, it becomes extremely difficult to satisfy all these requirements with existing networking tools.

Asynchronous Transfer Mode (ATM) provides the foundation for technology that will not only provide the desired simplification, but will also support those emerging applications that will demand end-to-end quality of service and bandwidth reservation.

The book provides an overview of the protocols and technologies that enable legacy networking protocols such as IP, to use ATM networks. Virtual LANs, LAN Emulation (LANE) and Multiprotocol over ATM (MPOA) are also described together with how they can be implemented and their limitations in ATM networks. The next generation IP protocol (IPv6) is also covered in the final chapter of the book.

A series of appendixes describe the various ATM-specific services and address formats allowing the reader to differentiate between the various AAL (ATM Adaptation Layer) service classes.

Although it is not a very thick book, it is not for the faint-hearted since a working knowledge of ATM is assumed. With a target readership of networking consultants and systems specialists, it provides a quick way to learn about SVN (Switched Virtual Networking) and associated protocols in order to design and deploy networks that utilise components from this framework.

This book is very subject-specific. Those who are fascinated by ATM technology and would like to learn more must shop around for something else.