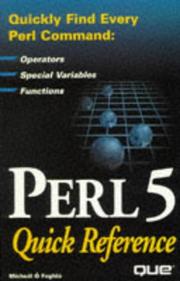 My first impressions of this book were good. It is a well- presented reference with a 40-page overview of the language and a main section describing each Perl operator and function with an example of its use. The introduction is well written and gives a reasonable - if not particularly inspiring - overview of what Perl can do for you.

On closer inspection there are a lot of rough edges. There are frequent typos; some of them potentially confusing such as quote marks and other details in Perl examples. Personally I find errors in the text equally worrying - they tell me the book hasn't been proof read before publication. An entire 4-page table on regular expression syntax is duplicated with a few trivial corrections to the English. The glossary appears to have come from a different book entirely, including - for example - entries for PPP and firewalls. Strangely these also appear in the index!

In general the Perl examples given are too simple and the semantically rich functions such as 'splice' receive little more attention than trivial functions such as 'kill'. A number of specific things also worried me: for example, the author describes awk as 'the UNIX report processor' (he should have referred to his glossary :-)) and unreservedly recommends recursion as 'neat'.

I think this has the makings of a useful book, but appears to have been published too hastily. If you want a book on Perl, check out the O'Reilly Camel book instead. This comes with a Perl reference card, which is also available via the O'Reilly Web site in Postscript form.