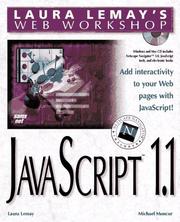 Every programmer and his manager are talking about Java so I thought I should find out about it. The first thing I discovered is Java Script is not Java. It is like comparing C to C shell programming. Java script is a Java like scripting language that was developed by Netscape for their browsers (and subsequently endorsed by SUN). Its syntax is less complex but mostly compatible with Java. (Java is stricter with its syntax)

Whilst there is an assumption that one can recognise and follow HTML script there are few other assumptions. I am not proficient in HTML but I found the book very clear and easy to understand. The style is the same as all the other Laura Lemay books. Lots of white space, chapters as self contained tutorials.

I noticed some references in the text to the 'latest browser' without giving any indication as to which browser, e.g. 'later than 2.1'. This makes me wonder if there are any other ambiguous items that I have missed. The CD contains all the example source and lots of other useful programs including HTML tools and Netcape for various platforms. Also included (on all Laura Lemay's CDs) are two 'books', in HTML format, on creating web pages. Probably more useful are the several 'real world examples' (both in the book and on the CD) that are going to be very useful starting points for many readers who will be able to customise them to produce major effects on their own web pages very quickly.

With the tools provided the book supplies all that is needed to become proficient in Java Script. Whilst much of the SW is shareware it permits enough experimenting to save one from buying the wrong tools. At£37.95 this is an expensive book but I think reasonable value as a complete toolkit. Those with their own web tools may think it a little over priced.