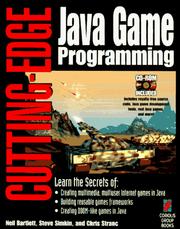 If you buy this book seduced by the title, you will become disappointed. This is not a book about Java game programming in general. Instead, the content is built around a 'game framework', a java package enclosed on the CD in both source and classfile format. A plus is the enclosed utilities such as Wacom ArtPad II Pen and POV-ray, a ray-tracing tool.

My first CD was damaged in some way, but after emailing the publisher, with one remainder, a new copy quickly arrived by airmail. The publisher seemed to be well aware of this problem.

After a history background about Internet-gaming, the author explains the functionality of his game package step by step. Two games (Domination and Maze-wars) are analysed in depth in their own chapters.

The remaining 100 pages (of 500) feels like fill. There is a completely misplaced Java tutorial. Misplaced because neither the title nor anything else in the text appeals to a beginner. Even worse is the next chapter, 'Java Optimisation'. The following code is presented as a serious example of that;

I really dislike reading sample-code that will not even compile (array not initialised).

The optimisation suggested is;

and then use variable product in the loop. Note this is the only optimisation example shown.

The last two chapters are about 'Fred', (a Java-DOOM clone) and 'Java resources on the net'. The former is of interest because it introduces some 3D-concepts. The latter feels rather unnecessary.

Personally it feels like the CD is more valuable than the book. Maybe this is a suitable buy for the hobbyist because the enclosed package really can give a kick-start in the art of writing 2D-based Java Games and thus the title will be worth its price.