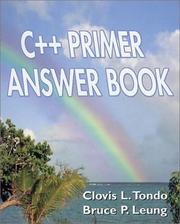 Recommended for anyone learning C++ from C++ Primer; it makes doing the exercises that much more worthwhile.

I'm currently teaching myself C++ using Lippman and Lajoie's C++ Primer 3rd ed . One of my few complaints is the lack of answers to the exercises, which often makes the already tempting idea of skipping them and getting straight onto the next section irresistible. I suspect others may have had similar problems. The C++ Primer Answer Book corrects this omission.

A book like this is going to be worse than useless if the answers are wrong. As a learner I can't confidently say that there are no errors, although I didn't notice any. Reassuringly, however, the acknowledgements indicate that the authors of C++ Primer have carried out a 'careful review of the text'. They have also written a very positive foreword.

The structure of the book mirrors that of C++ Primer; it contains 20 chapters, each of which contains the answers to the exercises in the corresponding chapter of C++ Primer. Every exercise is answered, including those that ask you to express an opinion. However, where an exercise says 'choose one of the following...' or similar, an answer is only provided for one of the options. This is understandable, but unfortunately there's no way to tell which one in advance without peeking at the answer.

The answers given include a fair amount of descriptive text; it's probably worth looking at the answer to an exercise even if you aren't going to do it to see if any useful hints or suggestions given.

Recommended for anyone learning C++ from C++ Primer; it makes doing the exercises that much more worthwhile.