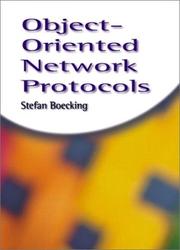 This book is written principally as a student text on the subject of networking and network protocols, though it also aims to assist the computer professional engaged in protocol development. It presents a general review of networking technology and the OSI model, then moves on to describe a newer, object- oriented model of communication.

The coverage of networking is good, if not deep. There are, however, plenty of other books covering the same ground; a quick search on Amazon found half-a-dozen which seemed a good bet. So this book has to stand or fall on its original content.

The principal reason for an OO approach given here is that it allows for protocols to be more dynamically configured ('composition'), so that protocol characteristics can be chosen to match particular needs more closely than is possible with current types of technology. This assertion is not unreasonable, but I am not sure that a student would necessarily understand why this is such a good thing without more justification. (Of course a good teacher would supply that, but not every teacher is a good one...). As I say, this is the justification but the last section is given to a series of performance trials in which some practical implementations are proved to be less efficient than standard protocols - which seemed to me little more than a demonstration that university students can't write protocols as well as professionals!

The description of protocol modelling is worthwhile reading but it is not sufficiently authoritative to belong in a student text without more coverage of alternatives. One could paraphrase what is presented here as: 'there is the OSI model and my model, which is object-oriented and therefore better'. This is not really good enough.

When one gets down to implementation issues, there is only a tiny bit of C++ presented, but enough to make ones nose wrinkle: uppercase TLAs as classnames and non-const raw pointers used all over the place, the sort of quality of code that is unfortunately all too common in texts like this. (I downloaded the library code that the example is based on and it is even worse than what appears in the book). Not recommended.