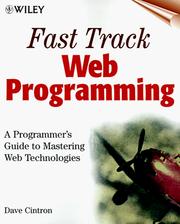 When the World Wide Web first appeared web pages were able to display little more than static text and images. These days, web sites are highly dynamic both on the server and on the client. This book explains the different web technologies available for creating such dynamism.

Beginning with an introduction to what the Internet is and how it works, the author continues by explaining the general aspects of programming in the context of the World Wide Web, e.g. scripting and applets. The next three chapters deal with basic HTML, Dynamic HTML (DHTML) and JavaScript. DHTML is based on the manipulation of the Document Object Model using JavaScript so it seems strange that JavaScript would be introduced afterwards.

Further chapters deal with Java, Perl and CGI and Internet Database Programming using Perl. This explains how Perl can be used to write a searching routine for use with a sequential flatfile database, as well as a basic search engine for text searches.

The book finishes with a look at security and e-commerce, multimedia over the web and future Internet standards. Throughout the book, sections entitled 'Informative Sites' guide the reader to additional resources on the Internet.

In addition, an interesting feature of the book is the inclusion of interviews with various members of the Internet industry. These interviews appear at the end of a number of chapters and focus on a prominent member of the field covered by that chapter.

I feel the book works best as an introduction to the different methods presented. As such it would be of most use to someone who is familiar with HTML and wishes to expand their knowledge to encompass other possibilities, while more seasoned web developers could probably learn about other methods by visiting the various websites dedicated to them. While useful initially, the nature of the book means the technologies it covers may change and be updated with time, so it may only have a limited shelf life.