REVIEW - How to Expand and Upgrade PCs 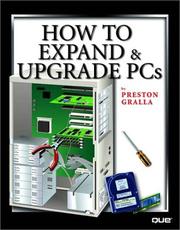 How to Expand and Upgrade PCs

Many of us (particularly among those that are not professional programmers) find ourselves maintaining our own hardware. From time to time I look at books that purport to help with this process. These two from the same publisher but at vastly different $/£conversion rates, arrived on my desk together (The Rosch book at 1.38 and Gralla book at 1.07). The first is a daunting doorstop, but then it needs to be when you consider the sheer range of equipment in use and the available items with which you might upgrade them.

Let me give you an example. A client of mine has had a machine that has never really functioned as expected during the five years of its life. Finally it became very erratic so he left it with me (he has a couple of other machines that can cover his work requirements in the short run) so that I could sort it out when I had a moment.

One new problem that had manifested was that it was not always starting when switched on. In fact the power supply needed replacing, but in the process of checking I examined the CPU (not something that I had had a reason to do previously) at which stage much else became clear as the heat sink and cooling fan were inadequately mounted so that there was no proper contact between the CPU and the heatsink. In effect the machine had been running with an inadequately cooled Pentium 120, probably since its date of purchase. That almost certainly means it has suffered damage. What to do? Well we decided to replace the motherboard (it is a bit hard to get a replacement for the CPU) and fit a low end AMD K6-2.

Everything else will be fine.

Now you have the picture, let me relate it to these two books.

Rosch's book tells me all I need to know and is daunting enough so that the ignorant will leave the job to an 'expert'. Gralla's book is a beautifully presented multi-colour slim volume with step-by- step instructions for most tasks that the naive might attempt. Unfortunately it gives no warnings about such things as voltage requirements for CPUs. The ignorant DIYer might happily just replace the CPU, after all K6-2's will fit into an old socket 7.

You and I know that fitting is not enough but the author issues no warnings.

If you are competent to upgrade hardware Rosch's book is one of several that will help. If you do not know enough to recognise the dangers in Gralla's book you are heading for a disaster, and if you do know enough the book will have nothing to offer you.