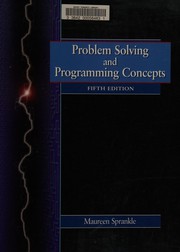 I flicked through this book when it arrived and found myself checking the copyright page because I had a definite sense of being in a time-warp. This is the fifth edition of a book that claims was first printed in 1989. Even at that date the style would have been considered old, and nothing seems to have changed. The book is littered with flow charts of the sort that I remember using when teaching Computer Studies in 1979.

Next I searched diligently to discover what computer language was being used. I could not find any indication though I think it is a pretty classical version of BASIC. That is only a guess because there is no way that I am going to wade through this book, nor would I ask anyone else to do so.

I find it very disturbing that this book is now in its fifth edition. That suggests that someone is still using it. Who? Whoever it is, is doing their students a grave disservice. The world has moved on and the insertion of such things as a section claiming to be about Object-Oriented programming is inexcusable. No doubt the author wrote the book in good faith, and has continued to revise it at in response to requests from the publisher.

Fundamentally this is not a review but an appeal to the publishers to never ever even think of producing a sixth edition. This book is of no practical use to anyone. Those who faced with a course of study based on it should ask the Head of Department to review the course material urgently so that the time spent in study will benefit the student.

If anyone else would like to look at this book they have but to ask. It has nothing to do with C, C++, modern versions of BASIC or any other material that is in current commercial use.