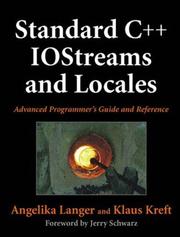 If you feel ready to take the plunge into learning about how to use 'Standard IOStreams and Locales' this book is an excellent source to study.

I have very few doubts that I/O libraries are amongst the most difficult aspects of any language. They provide essential support for most programmers, particularly those that are just starting. It is very difficult to design a library that supports everything from the needs of programmers writing their first 'Hello World' program to those writing large applications for an international market. The first time programmer is not going to be concerned by which decimal separator will be used in the I/O for their work as the development environment will be set up to whatever the local rules are. If you are writing a financial package for world-wide use such points of detail become important.

If you have any doubt about the difficulties take a look at the mess in the I/O parts of the Standard C Library. Even when the programmer has learnt to navigate through the tar-pits of the scanf family of functions and knows that gets() is essentially broken few go on to master the locale support.

There is a much greater range of support for I/O in the Standard C++ Library. What we have is the result of over a decade of experiment and development. The lead developers were amongst the most skilled and knowledgeable in that aspect of library design. Their understanding of the needs of the international community heavily influenced the eventual design. The result is a very powerful set of tools but one that requires considerable skill and understanding if it is to be used at much more than a trivial level.

How many programmers understand the separation between 'formatting' and 'buffering, code conversion and transport of characters to and from an external device'? You have no need for such understanding when you write your early programs, however if you want to provide support for automatic logging (to a file) of all I/O in a student program you need to understand the difference and provide suitable stream buffers to do the work.

The texts for novices should confine themselves to good practice. In other words the authors of such books should introduce their readers to the basic use of iostream (it would help if the mentioned the existence of the wide character versions) and clearly defer further information to a later text. Once a programmer has mastered the basics they should acquire and study an in depth text on the Standard C++ Library (my choice would be The C++ Standard Library by Nicolai Josuttis).

At this stage many programmers will still be using relatively simple I/O or be relying on some form of GUI support library. Up until now there has been nothing to support the programmer who wants to more about the rich tapestry of tools (to mix a metaphor) available for more advanced I/O programming. Such questions as 'How do I deal with different collation sequences?', 'How should I cope with multi-byte character encodings?', 'Is there any way of handling different national date and time formats?' and so on.

Langer&Kraft address the needs of these people in two ways. The first 342 pages (part 1) is a tutorial on the subject. This part of the book is well written with explanations based on well thought out examples based on relatively simple needs. This means that understanding the problem does not obscure understanding the solution, something that is often missed in advanced texts. The English flows better than in many texts of a similar level (though I think we still have some way to go before I would be entirely satisfied).

The second part of the book is reference guide of just over 200 pages. These add little if anything to what you would find in the C++ Standard but I have no great quarrel with that. These are the parts of the Standard that I need to look up when working in this area of programming.

The book concludes with a number of useful appendices. These include a comparison between the C and C++ locales as well as documenting the differences between the classic iostream (i.e. that provided by

If you feel ready to take the plunge into learning about how to use 'Standard IOStreams and Locales' this book is an excellent source to study. Even if you do not need to use the material in an advanced fashion, you will benefit from studying as many of the techniques are applicable to other areas of programming. Let me conclude by quoting the final paragraph of the Foreword--written by Jerry Shwarz, who some of you may know designed and implemented the first iostream library circa 1987.

... Not only does it address the kinds of questions that concern me, but also it does so with concrete examples that enable readers to quickly adapt the ideas to their own requirements. I am no longer contemplating writing a book on the library so I have only positive feelings about this book. Anyone with an early revision of this book should refer to the extensive errata athttp://www.home.camelot.de/langer/IOStreams/errata.htm-- Webmaster