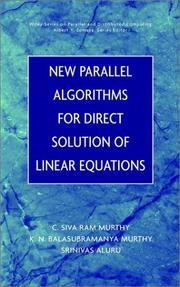 I have no doubt that this book is indeed, as claimed on the back cover, a groundbreaking work on the subject. Solving large systems of linear equations is very important in a number of fields and discovering ways that make best use of large scale parallel processing is clearly important. So why is the book, in my opinion, so badly flawed. Let me explain.

Each chapter finishes with some end of chapter problems. Presumably, this is because the book is intended for students (if it is not, answers would be appropriate). Given that, I find the text and problems come from different worlds. A quick scan of the problems at the end of chapter 1 reveals such trivial problems as:

Determine the sparsity (i.e. the ratio of the number of zero elements to the total number of elements) associated with the following matrices:


Pretty simple stuff. If you really need simple problems then the text is going to bewilder you. What is irritating is that the authors' English is better than average for an academic technical work, but when I try to make sense of it I find that they make all kinds of suppositions about what I will already know. These are incompatible with the level of ignorance that the end of chapter problems suppose.

Then there is the issue of the source code in the book; I think it is written in High Performance Fortran but I cannot be sure because I have never studied that language. On the other hand, it might just be pseudo code. The point here is that once again the authors make assumptions about their readers without ever making it explicit.

In the preface the authors write:

The primary purpose of writing this book is for easy dissemination of new research results in parallel numerical algebra. Thus we expect it to be of value to researchers and practicing (stet) professionals. There is a great need and interest in many scientific disciplines? for solving problems using high-performance computers.

Researchers and professionals (presumably ones using programming) need very different approaches, both different to the needs of a student. I think this book would be much better if its authors had decided which group they were writing for. The researchers need all the theoretical performance calculations in order to further the work, professionals need more emphasis on how to use the material and students need fewer assumptions about what they might already know.

Actually, I think the price makes all the above of largely academic interest.

The book needs a thorough rethink and the technical reviewers should be taken to task for supporting print in the current form (that is, assuming they did rather than that their advice was ignored.)