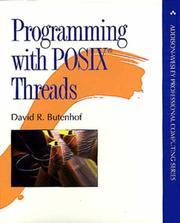 This book aims both to act both as a tutorial in threaded programming and as a reference for the POSIX 1003.1c-1995 standard interface for threading implementations - a standard which is more commonly known as pthreads.

The book begins with an overview of the basic concepts behind asynchronous and threaded programming and then moves on to discuss the guts of pthreads, first in a chapter on creating and running threads, and then in a chapter on the various methods of synchronising threads that pthreads provides.

The final section of the book is a reference to the pthreads interface listing all the functions along with their prototypes and brief descriptions.

Overall this is a well written book that well meets it's twin objectives and provides an excellent introduction to threaded programming for anyone who is a competent C programmer in the non- threaded world.