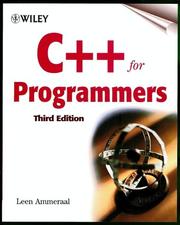 At first sight this book did not appear so bad: while leafing through it I noticed that the author had successfully avoided the most common errors of the worst books (e.g,

, badly constructed constructors). The fact that I spotted several errors, as well as unfortunate explanations did not put it automatically on my 'not recommended' list, though it prevented it from being put on the 'recommended' list. In addition, it seemed to have nice chapters on STL and streams. It could have been just one of those books that would not do too much harm despite the fact that it would force you to relearn from a better book if you wished to become better than just a casual C++ programmer.

I was wrong. While reading the book I found too many fundamental errors that, in my opinion, are truly harmful, will impair the reader's understanding of C++ and will prevent her from correctly programming in C++. So I stopped reading just before the final chapters on STL and streams. Even if they are perfect, they will hardly do any good. You are better off reading a good book cover to cover.

I believe I owe both the author of the book and the readers of this review an explanation about the distinctions I make between apparently mild errors (that are not always mild) and truly harmful errors. Here are a few comments/errors that would not justify putting this book on the 'not recommended' list:

This comment is very problematical, because according to the current literal text of the C++ Standard Ammeraal is right. However, that is unlikely to survive a defect report because it surprised members of the C++ Standards Committees when they realised how the final words read. FG Multiple inheritance is dealt with in less than a page. It does not even mention that this subject is complicated. In that case, multiple inheritance should have been omitted altogether.

However, the following problems are too important to ignore and, in my view, warrant 'awarding' this book the infamous 'not recommended' mark:

seems to cause a great deal of misunderstanding, the sad thing is that technical reviewers too often miss its abuse and thereby do authors a disservice. The correct cast in the above is almost always a . FG To conclude, I was left with one curious question: why is the example about function objects (section 6.16) so much better than all other examples? My answer: who cares? More examples of errors can be found on my pagehttp://www.cs.technion.ac.il/users/yechiel/CS/BadBooksC+C++.html#AmmeraalCPP4ProgNot Recommended. If anyone would like to take a second look at this book, I can provide a review copy. If you are wondering, this is because this review seems to conflict with other reviews of Ammeraal's books. - FG