REVIEW - The Essence of Professional Issues in Computing 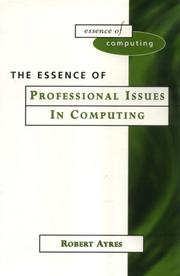 The Essence of Professional Issues in Computing

This book's diabolical name stems from the fact that it is part of a series of computer titles named 'Essence of Computing'. I have to comment that it is good to see a computing book with such a purpose. It is also very refreshing to see that it has a definite UK bias (a lot of UK related legal information is discussed). This will, however, limit its international appeal.

The book is very thoughtfully put together. Each chapter starts with a few key informational bullet points, followed by an overview of the material that is contained, including a paragraph describing the chapter's relation to the rest of the book really very useful. Similarly, each chapter ends with a short summary section, followed by a further reading mini-bibliography and a points to consider list, which would not go amiss being set as homework something which I'm sure was not too far from the author's mind.

However, despite the logical structure, I think that the visual layout of the book (and presumably the other books in the series) leaves something to be desired. The level of some subheadings is confusingly unclear and tends to hide some of the text's structure.

The book's subject matter includes social, legal and moral issues related to computer use. This is 'use' in its widest context the book is not just geared towards programming issues. However, for each type of issue the book describes a lot of background (for ethics, it even describes in some depth a number of schools of philosophy!) but leaves a lot of conclusions to be made by the reader.

It has been written as a textbook and this is clear throughout. Perhaps I'm too far removed from academia these days, but in places the dry textbook style tended to detract from the readability.

I was galled by the incorrect usage of term 'hacker' (where the author meant 'cracker').

Overall, this is an interesting foray into the 'professional' issues, perhaps benefiting from not delving too deep raising issues rather than attempting to provide all the answers. I wouldn't say that it was a ripping good yarn, but then I have to bear in mind that I am probably not a member of the target audience.