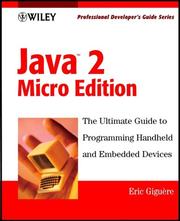 I picked this title because I have been working with solutions for the Palm Computing platform for some time. My main path into it has been to read some suitable books. The relatively few titles that I found were C/C++ centred and strongly emphasised the Metroworks Code Warrior development environment. One of the better titles was Eric Gigure's Palm Database Programming, a wide introduction to programming for the peculiar Palm OS.

Handheld devices and the development of them has evolved, so instead of pure Palm and C/C++ this new title by the same author is not only Java focused but also deals with handheld devices in a wider sense.

The first chapter is a general but technically detailed overview of the handheld world. Bottlenecks like limited memory and storage capacity are taken note of, as well as various input methods such as Palm's stylus pen and portable keyboards.

Next follows a long chapter reviewing the history and evolution of Java and also presenting an overview of the complete Java environment from a technical point of view. This overview of the, nowadays, vast Java platform is detailed and one of the best that I have read. This concludes by placing the Java 2 Micro Edition in its (not very obvious) context within the J2EE (Java 2 Enterprise Edition).

The first part of the book finishes with a couple of pages of useful Java-programming tricks and strategies for the relatively slow and memory-poor devices we are dealing with.

The second part is a harder to read introduction to configurations and profiles for the MIDP (Mobile Information Device Profile) interface. It is obviously more difficult to explain what a MID-Let (basically a special Java class for handheld devices) is, than to explain what Java is!

In the third and last part focus is changed to Palm Computing, but only as a lightweight introduction. To really start programming for the Palm OS, you will need a guide especially aimed at it. In the same brief way developing with Cellular Phone simulators is discussed.

The last two chapters consist of an interesting introduction to Java for the lesser known Blackberry Wireless Handholds followed by a chapter assigned to an excellent freeware, open source tool; namely the Waba virtual machine. It was the first JVM (Java virtual machine) for Palm pilot, even before Sun's own K Virtual Machine. I recommend Waba for everyone who wants to take their first look on programming for the Palm (and other handheld) platforms. (http://www.wabasoft.com/). The chapter in question serves as a short but useful introduction to developing with Waba.

The way in which the book closes is a disappointment. In an appendix there are 50 pages of source code for a demo application, which is already on the enclosed CD!

If you take this title for what it is, a line of brief but technically correct overviews of different parts of developing for the handheld world, or just as a lightweight starter kit, it is money well spent.