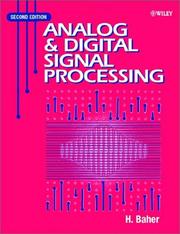 The core of the book covers standard topics within the subject;

These are not separate topics of study. Fourier series and the Fourier transform are very closely related, the Laplace transform is a generalisation of the Fourier transform and the Z-transform is strongly related to the Laplace transform. In consequence, similar but not identical concepts occur in different situations and a sound understanding of these topics can be surprisingly elusive. The net effect is somewhat akin to a hall of mirrors; there are often several different ways of explaining the reasons for some observed behaviour and while none are wrong, the poorer ones take a longer, reflected route to the truth. Baher is able to distinguish between original concept and reflection and this greatly aids both the conciseness and clarity of his presentation.

Overall, this book provides a comprehensive yet concise discussion of the principles of analogue and digital signal processing. Baher's personal mastery of the subject shines through and his presentation is clear and logical. Despite this, the mathematical nature of the subject matter makes large sections of the book hard going. This is not a criticism, but it is a warning; this book is emphatically not a casual read. That said, it is of sufficient quality to repay the intellectual investment. Recommended to the determined student.