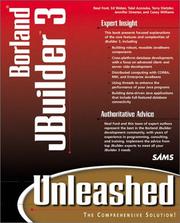 A 1,000 page book on an IDE? A very unlikely scenario and so it proves in this book. This weighty tome tries to deliver 'Java everything plus JBuilder' and inevitably fails.

The first 150 pages try to cover software development in general and manage little more than this example on 'Best Practices':

'Development teams should make efforts to establish their own coding standards. These standards can consist of high-level practices such as the use of design patterns or low-level standards including the specific formats for program structures such as if blocks'

I.e. well intentioned but ultimately too shallow to be of any real use.

I also take exception to some of the author's 'example' code viz this little fragment on 'handling I/O Exceptions' (middle of the try block removed for brevity):

This has so many faults [user told 'exception' rather than user language, no mention of filename or any detail from exception, no logging of exception, and the mysterious return of a string "Error" from the method (whose signature we never see) for the error case] that I would hesitate to call it an 'example'.

The book has 6 different authors, who do make a reasonable job of writing in a consistent style; if only the book as a whole didn't have such a 'global' ambition.

While there are some good chapters on use of JBuilder, they are so thinly scattered to make this book neither a good reference nor an introductory text. The publication date of 1999 just adds to this book's problems, that it is written at a snapshot in time which ages far too quickly in the Java world.Perl, Python etc.