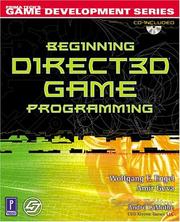 I am not going to spend a lot of time on these books but I want to introduce them to you and then invite others to take one and give it a good work out.

These three books are part of a new series that Prima are publishing aiming at the technical aspect of computer games. Note that reading any or all these books will not turn you into a games designer nor will it turn you into the next superstar game writer. Writing a good game needs a wide range of skills. For example, one of the great roll playing games of the late 80's (I think I have the time scale right) was 'Betrayal at Krondor.' It is hard to pin down exactly what it had but it created a sense of being in the game that I had never previously experienced from a graphical roll playing game. The graphics were limited by the need to run it on a pretty basic platform (compared with what we had five years later) but the game play, sub-plots and non-linear organisation really worked.The same game engine was used a few years later for another game ('Betrayal in I forget where) but it lacked the magic touch of the original game designer. A couple of years after that 'Return to Krondor' by the original designer came on the market. I cannot remember a time when I was more disappointed. The graphics were far superior to the original but the game was awful, I finished it in three days and felt absolutely no desire to play it again.

Why do I tell you this? What has it got to do with these three books? Well the point I want to make is that a good game requires far more than technical quality, and sometimes the pursuit of technical excellence can destroy the creativity of the game designer. These books are about aspects of the technical side of games programming. If you have ambitions to design successful computer games these are not the place to start. If you want to become one of those people who can realise the creativity of a good games designer so that the product leaves the designer and becomes a marketable product one or more of the books in this series would be worth your time.

I think that is all I want to write at this stage. If you have ambitions to become a games' implementer (or even better from the review side, you already are an implementer of graphics for games) I would be happy to have your input and have you review one of these books.