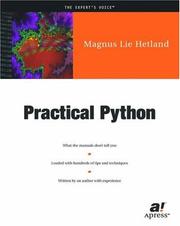 As many of you will have noticed, Python is becoming an increasingly popular language to write books about. This is not the place to speculate as to why Python has attracted so much attention and not just from newcomers but also from those who are already experts in languages such as C++.

This is another book aimed at the person who wants to learn about Python. You do need some programming background because understanding of programming fundamentals is implicit in the text. I suspect that the author does not recognise this and believes that the newcomer to programming could learn to programme (with Python) by studying this book. I guess someone with talent and the willingness to work hard at understanding might manage but this is not the book for the average newcomer.

It is a thorough introduction to the fundamentals of Python (and I will excuse the author a degree of language bigotry, because it is certainly milder than I have found from many authors - particularly those introducing Java) Of course, it is not an advanced text and only gives you an appreciation of the language whilst leaving you with a desire for some advanced texts. (I do not know why advanced texts for C++ seem to outnumber the sum total of advanced texts for all the other computer languages.)

I like the author's style of writing; it is relaxed and addressed directly to the individual reader. My Python is not good enough to make any in depth comments on the author's source code, however the code appears to do what it is intended to do. In the case of languages such as Python that is probably a good enough test because unlike C, C++, Java etc. that have multiple implementations Python is effectively defined by its implementation. That is available free.

How does it compare with other books aimed at introducing Python? Well it largely depends on how you weight such things as writing style (easy going in this case), pace (relatively gentle), depth (stays away from the highly technical), interesting examples (well the y aren't inspired). Another element that may matter to you is exercises. If you are studying by yourself the fact that this book does not have any exercises to help you consolidate your learning may be a big negative. On the other hand, if you were a teacher who liked to set his/her own exercises that might be an advantage.

Over all this is certainly a book to consider if you have decided to learn Python.